Good old serendipity. It’s one of the buzzwords of this blog that keeps cropping up over and over again, along with terms such as “toxic”, “torture”, “greed”, “eco-vandals”, “Watermelons” and “Rossendale Council”…

Serendipity has been very good to me this week, and real-life has swirled around MindWind as organically as the winds that swirl around the Campsie Fells. If this blog is something of a turbine itself, transforming the destructive force of the wind scammers into a positive, constructive energy that can help humanity, well this week’s weather has resembled Hurricane Ophelia: a gentle breeze of conversation whipping up into a fierce storm, before easing back down again.

So much has happened this week in terms of experiencing wind blight, writing about it, discussing the points raised, and then using the discussion to further develop the blog. It’s definitely sustainable, that’s for sure!

Just stop me if ever I start plastering my blog all over people’s newsfeeds, whether they want to read it or not. Call me out if ever I promote my blog with lies and distortions of the truth, making loads and loads of money from gratuitously upsetting people (whilst also getting paid “constraints”, even if I don’t write a single word!).

The entry about the SNP is my first really successful blog entry, and an introduction to how the blogosphere works. Now it’s out there in circulation, it’s taken on a life of its own, circulating the globe and hopefully providing support for wind victims the world over. 100% positive feedback so far, not a single word of criticism for the points made, If by any chance anyone is reading and finds something to dispute, please, please get in touch. This website isn’t about one-way propaganda, it’s about free and open discourse that encourages everyone to chip in with useful information that can add to our collective knowledge base. Don’t let my snarling invective put you off! A dog’s bark is always worse than its bite. And anyway, dogs mostly bark in order to alert you to some kind of imminent danger.

It’s at this point I should explain, just in case anyone hadn’t noticed the stylistic trimmings yet, that I am a graduate of one of the finest Journalism courses in the land. At the time I underperformed, getting only a 2:2 (a “wind turbine” degree: I had the capacity to get a First but only delivered a fraction of what was expected of me); looking back, however, my excellent tutors certainly instilled in me some of the fundamentals of great Journalism: how to ask the right questions, how to see through PR puff pieces, how to fact-check EVERYTHING…

These blogs are what is called in the trade “think pieces” (more technically, “opinion-editorials” or “op-eds”), and their point is to make you think, to tell you stuff you didn’t already know. To be challenging, troubling and thought-provoking, whilst hopefully, like all my journalistic role models, raising a naughty laugh every now and then. We wind victims need to find humour in amongst all the eco-destruction of our homelands.

The internet has been an amazing help in allowing readers to continue the discussion where the op-eds leave off, and I hope you all know just how much I actively encourage you to use these pieces as a springboard for your own research and debate. As a thought-experiment, look for some pro-wind websites that express the opposite viewpoint to mine, and see how much they encourage you to have your say. Anyone who seems to be denying you a voice would appear to have something to hide. You see it a lot with the Guardian’s website (formerly “Comment Is Free”). If there’s no comment section beneath an article, you can probably call BS on its contents. Comments are the journalistic version of science: peer-review.

I’ve noticed a total silence from the councils and politicians I’ve contacted this week. Let’s apply some Socratic Questioning.

Kirklees do tend to reply, after a fashion, although with zero enthusiasm for looking into the problems reported. Still, they have said they’re investigating the blatant case of a planning proposal for one small turbine having nothing in common with the three large turbines actually erected, so I’ll give them the benefit of the doubt for now and hold fire until I receive more information.

All in all though, it really seems like councils can’t be arsed to do anything to stop wind blight, despite the fact that I’m alerting them to a universal problem that is experienced all over the world. WHY DON’T THEY RESPOND???

Again I feel I’m talking to myself, and I really want to know why. What is the reason the councils have for not engaging with the letters I write to them? Is it that they’re not receiving them for some reason? Is it that they’re reading them and don’t think they’re worthy of a response? Or that they don’t know how to respond? Why can’t you people just talk like normal humans and simply answer the questions asked of you? Why the silence???

How come if someone reported a broken bus shelter or “hate speech” (like calling someone “luv”, no doubt), you Councils would be instantly on the case; but the minute someone reports crimes of eco-destruction on an industrial scale, all they get from the Councils is a total tumbleweed moment?

What is it about wind turbines that makes people in authority just clam up and suddenly go all non-responsive? How come you never get straight, plain English answers? You have to prod and prod, pester and pester people for even a single sentence.

And these are simple, basic, everyday questions that we shouldn’t even have to ask – we should be able to find all this stuff out at the click of a mouse. What is the specific purpose of each turbine? What are the service level agreements in place? What are the financial arrangements? What are the penalties if a turbine doesn’t meet its electricity generation claims? How can the public monitor the performance of each turbine and report those that don’t have any environmental benefit? What measures are available to make an official complaint about any inappropriate turbines?

You see what I mean? Just common or garden questions that you’d expect to be asked of every school, every hospital, every transport network in the land. What is it that makes wind turbines so different? Why won’t anybody provide simple answers to these simple questions? 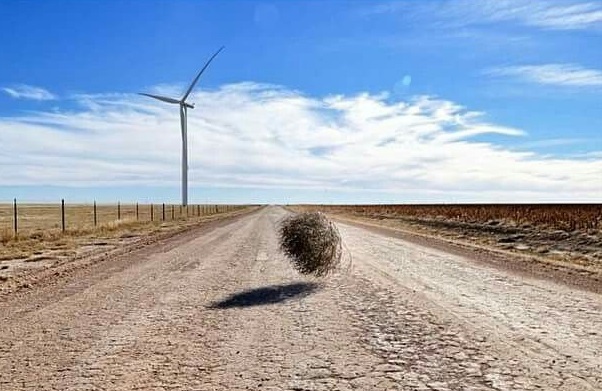 It feels like the Devil himself – or maybe just Common Purpose (http://www.cpexposed.com/about-common-purpose) – has taken over the hearts and minds of vast swathes of our bureaucracies, and nobody is speaking up! I have only ever had ONE solitary soulful, empathetic, engaged, intellectually honest response from a wind supporter, and that was the Green Party guy I corresponded with, whose awesome reply I posted a few weeks ago. He was quite literally the ONLY person I have ever known, in my entire life, to make a passionate case from the bottom of his heart about why he felt we needed wind turbines. He was  sympathetic to the disfigurement of the landscape they cause, he talked to me like a human, he was happy to bat my points back and forth like a proper discourse. We ultimately agreed to disagree, but I think you’d have to say there was a lot of mutual respect there.

WHY IS IT SO HARD TO HAVE A TWO-WAY DIALOGUE WITH THE AUTHORITIES ABOUT WIND BLIGHT?

EVEN IF I DISAGREE WITH PEOPLE, I RESPECT THEM FAR MORE FOR ENGAGING IN A DISCOURSE THAN JUST SHYING AWAY FROM IT!

This is the document I lovingly prepared for the Planning Inspectorate – a fact-filled set of case studies that took hours of my own free time, travel, fieldwork and research to present them with a review of all the mistakes their inspectors Brendan Lyons, Robin Brooks and George Baird had made, possibly deliberately or under some kind of duress. I volunteered to travel down to Bristol for a chat in the Planning Inspectorate’s offices. I love talking to people. I love conversation and debate and discussion, systematically working through disagreements and coming up with a mutually beneficial win-win synthesis. Yet they didn’t want to know. Their replies didn’t answer my questions, other than to say they’d destroyed the paperwork so couldn’t provide any more information about the locations they’d visited to carry out their demonstrably inaccurate Environmental Impact Assessments.

All in all, the Planning Inspectorate provided me with nothing but the cold, emotionless, passive-aggressive, scripted auto-responses of someone advised by their lawyer that anything they say might be used in evidence against them, so best say nothing.

I believe the basic tenet of my complaint was fair and reasonable. Scout Moor’s expansion was rejected by Planning Inspectors for eminently sensible reasons. So they obviously get it now, having clearly taken on board my points. But over the last decade they’d already allowed dozens and dozens of inappropriate wind turbines that had been rejected by local councils. What changed? And if they’re now refusing wind farm schemes, why did they previously allow equally destructive ones to slip through? Even David Cameron announced that the public were fed up with wind farms, implying strongly that too many inappropriate ones had been approved, which were now starting to have a negative psychological impact on the public.

Surely in terms of process, there had been a major error in Planning Policy over the last ten years. Would the Planning Inspectorate like to discuss the process failure and work with me to rectify some of their worst mistakes?

Their replies made no sense, and were bordering on offensive and personally disrespectful, bearing in mind I pay these people, with my taxes, to do what I tell them to do.

SO WHY IS IT SO HARD TO HAVE A GENUINE CONVERSATION WITH THE AUTHORITIES ABOUT WIND BLIGHT?

WHAT ARE THEY SO SCARED OF???

Here, look, you’re all invited to my house for a cuppa. Every single person reading this is welcome, just send a comment and I’ll invite you over for a coffee, a cake and a natter about wind energy and its impact! Why aren’t all the people who inflict wind turbines on us equally as open, hospitable and willing to have a normal, adult conversation about their policies?

To wrap things up for now, a couple of more light-hearted points. Firstly, in doing some research about the Marilyns of the UK, I discovered that my home town is actually a Marilyn! The hospital I was born in lies just a few metres below the summit, which is actually in someone’s back garden. Hills come in all shapes and sizes, and this one is a whole town, Crowborough in East Sussex.

So when I say wind turbines screw up my natural habitat, it’s because I was literally born on a Marilyn!

And finally, I believe at last I’ve found a genuine LIME. Thank you Mary for pointing me in this direction 🙂 Remember, a Lime is someone truly Green on the inside, someone with an internal locus of control, who really does believe in wind power, who takes full responsibility for the success or failure of their wind projects, and who isn’t doing it to make profit or degrade the countryside. I’d like to introduce this inspiring gentleman, just to prove that I really am receptive to those who can “do wind well”.

It can be done!

View all posts by peakprotection

3 thoughts on “I Was Born On A Marilyn”

If you care about the conservation of Britain’s wild, upland landscapes of outstanding natural beauty, and you believe that we as a society should prioritise the wellbeing of the hills and mountains that provide the source of our water, over any form of unnecessary development whatsoever, then you are part of the Peak Protection Force.