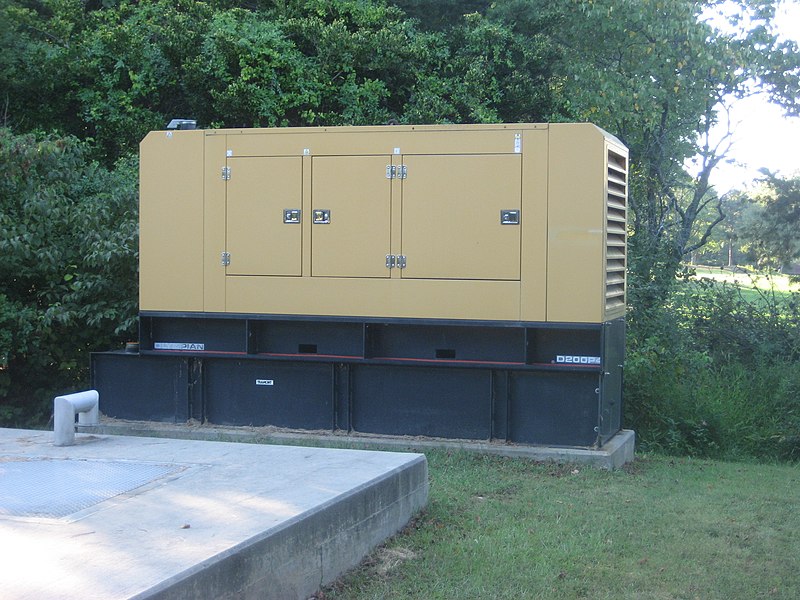 Just when you think the Hendy Wind Scam couldn’t degenerate further into the realms of tragicomedy, a local witness has informed me that the Hendy mob, having hastily erected their first wind turbine before the end-of-January deadline for subsidies (beware flying turbine blades if passing; I’d imagine many of the screws and bolts holding the whole contraption together won’t have been fastened tightly), is actually using a DIESEL generator in order to give the appearance that the turbine is powered by the wind.

THIS IS THE SCAM OF THE CENTURY!

Do I have proof, you might be asking? Yes, I would answer. I have proof. But you’ll have to get over to the Hendy Wind Farm for yourself and inspect the site. Ask the operators to give you a demonstration of how the wind powers the turbine. When you’ve been there long enough and seen no evidence whatsoever of wind actually generating electricity, then I suggest thoroughly turning the site over in order to locate the diesel generator being used to operate the turbine.

So where are the police? I first reported my concerns about the antisocial activities at Hendy on January 4th 2019, via the Dyfed-Powys Police web portal. Under the apprehension that to withhold knowledge of a crime is a crime itself, I thought it my civic duty to report the video evidence I’d seen of a construction worker attempting to murder a member of the public by driving a speeding truck directly towards her.

My report was duly referenced and I received a short but fairly nice reply saying they were aware of the incident and it was being looked into. A month later, following more documentary evidence of illegal activities (unlawful construction on a Sunday), I contacted them once again and informed him of the latest crime to have occurred onsite.

The reply this time was distinctly less friendly, indeed I would say it bordered on unprofessional and unbecoming of a police service.

“Thank you for your email.

As you can see from the below I did reply to you advising you that an investigation is ongoing and I thanked you for contacting us.

You are not a victim in relation to the incident that you merely witnessed following a video posted on Wales Online.  I have informed you that we are aware of the video and we are investigating the matter.  You are not eligible for updates regarding the progress of the investigation and therefore will not be receiving any.  There are no further steps that you are required to take as the matter is being dealt with by Police.

In relation to the second issue you have raised – again Thank you for reporting that to us and I have emailed the relevant officer notifying him of your concerns.

I replied by saying:

“Many thanks for the reply, I am grateful for your update and I do not expect any further correspondence from yourself. I would just remind you that one does not have to be the victim of a crime to report it to the police; but having done my civic duty and informed the police of any criminal activities I have witnessed, I am happy to leave my involvement at that.

One final piece of information for you that might or might not be useful, but again I feel it is my civic duty to inform the police of alleged corruption. There is a blog called Jac o’ the North that strongly suggests the firm behind the Hendy Wind Farm has been acting unlawfully on a very large scale.

I’m sure as part of your investigations, the allegations within this blog will be thoroughly checked over, and any wrongdoing dealt with via the correct channels.

Thanks again and all the best with your investigation. I am genuinely grateful for your help in helping resolve this matter, as indeed are the local community.

Now what? Is that it? A person reports an attempted murder and that’s the end of the matter? No court case? No trial? No further questions? And then a much wider-ranging allegation of gross fraud is made, and not even the slightest acknowledgement from the police. Not even one word of response.

Sorry, but what exactly is Dyfed-Powys Police actually for? What is its purpose? It evidently doesn’t see its role as serving or protecting the public, or bringing proven criminals to justice. Why should ANYONE in Wales obey the law when the police are teaching by example that crime pays, indeed overtly unlawful behaviour is actively encouraged?!

This is another of those conversations that needs DIALECTIC. No hidden agendas. No corporate BS, censorship, gaslighting or any of the other weapons of psychological warfare waged by the wind scammers.

I need to sit down face to face with a high-ranking police officer in Dyfed-Powys, and I need a full and frank intellectual debate about the role of law and where it relates to the actions of the Hendy Wind Farm developers. Where documentary evidence is provided to the police, I need somebody to walk through with me what processes the police follow in order to ascertain the correct course of action. I do not want to be stonewalled, obstructed or blocked by the fucking police force of all people, otherwise once again that would indicate that they are not carrying out their statutory duty in protecting and reassuring the public.

By contrast, West Yorkshire Police have proven themselves to be A1: when I informed them about Leeds-based Energiekontor’s harmful practices, the police officers I dealt with were honest, thoughtful, intelligent, empathetic and clearly on the side of the general public. I enjoy talking to the police, because I deal in facts and objective reality, and I see a conversation with the police as one of the most perfect examples of Hegelian Dialectic (which is literally my hobby!).

Here’s a thesis (“this man is guilty”), there’s an antithesis (“this man is not guilty”) and somewhere in the middle there’s a synthesis (“this man did indeed commit the crime, but there were these mitigating circumstances…”). That’s the kind of proper dialectic I want with the Welsh police regarding Hendy.  A back-and-forth logical discussion about what crimes were committed and what the punishment will be.

To be told in no uncertain terms to butt out, well yet again it’s going to lead to the Streisand Effect (see last entry): the very lack of reassurance and unwillingness to enter an honest dialogue only leading to further doubts and queries, even more negative publicity and intrigue about exactly what Dyfed-Powys Police might be hiding. Like: who exactly is paying them to cover for the Hendy Wind Scam, and why?

So to the PC who emailed me, if you’re reading, I do still have a few questions, even though I politely suggested you no longer need reply. You are certainly not obliged to say anything, but anything you do say may be taken down and used as evidence in my blog.

View all posts by peakprotection

If you care about the conservation of Britain’s wild, upland landscapes of outstanding natural beauty, and you believe that we as a society should prioritise the wellbeing of the hills and mountains that provide the source of our water, over any form of unnecessary development whatsoever, then you are part of the Peak Protection Force.